The History of the Cherryville New Years Shooters


The history of the Cherryville New Years Shooters basically can go back thousands of years. The "Chant" and producing loud noise is a ritual that has been in existence since the 1300's. Celebrating the "New Year" on January 1st can be linked back to the Romans in 45 BC during the reign of Julius Caesar. The act of celebrating the "New Year" can go back at least 4,000 years to the ancient Egyptians and Babylonians. The pioneer immigrants that settled in the Cherryville NC area can be linked back to the area of the Rhine River in Germania (Germany). In that area of the world many Old World customs were formed from the Bohemian, German, Scottish, Irish, and English. In the 1750's German Immigrants settled in the Indian Creek and Howard's Creek area north of the current Cherryville. Along with the German immigrants were the Scotch-Irish, Swiss, Dutch and French. It is believed that the actual tradition is a cultural mix of all these immigrants. The last 250 years of the tradition basically parallels the history of the Cherryville area. Land grants from the King of England began in the mid 1700's for the area known as Anson and later Tryon County. The area along the Indian Creek began to grow from a few pioneer families to many. Names which appear on early land grants and records include Black, Wise, Stroup, Beam, Horse (Huss), Houser, Baker, Whitesides, Homesley, Sullivan, Roberts, Eaker, Carpenter, Brown, Anthony, Havner (Heafner), Reynolds, and Cyzer (Kiser). In the 1800's the area became known as White Pines. After the railroad was built, the name was changed to Cherryville in 1865 due to the many cherry trees that were planted.
Most of the early settlers came through Pennsylvania where the Cherryville tradition can be traced. The Philadelphia Mummers were a group who "shot" in the New Year going house-to-house, singing songs, shooting guns, performing dances and all were rewarded with food and drink. The early Mummers appointed a leader or speech director who recited such rhymes like this:
"Here we stand before your door,
As we stood the year before;
Give us whiskey; give us gin,
Open the door and let us in."
The first president, George Washington, welcomed the tradition and was entertained by the Mummers in Philadelphia (the first capital of the US). 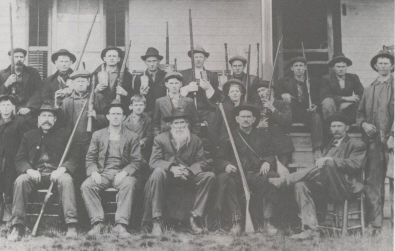 The early Cherryville area pioneers would walk house-to-house which could be very far apart and perform a version of the Mummers' New Year's Celebration. The "Chant" would be said or "cried" to the welcoming household. Then the firing of the current day weapons which were black powder muskets and pistols. After firing the loud blasts, the shooting party would be given food and drink for their due diligence of performing the act. And what was the purpose of this affair? With the Old-World customs came superstition and folklore tales of witches and spirits. It was believed that the loud noises would drive out demons, witches, and other non-desirable entities on the property and bless the land for the upcoming year. Since most of the pioneers were farmers and depended heavily on their crops, not "shooting in the New Year" could be detrimental to their future success.
The event today takes on the same form as it did hundreds of years ago. The shooters will go house-to-house, the family will be "called out", the speech crier will recite the "Chant" and the shooters will fire their muskets (black powder only-without bullets) until all have fired. The muskets used today are originals and reproduction models from the 1800's. After the shooting, the guests are treated with refreshments or gifts. The refreshments may be a full meal or just a treat such as a cigar or apple. Cherryville NC is the only place on earth that the event still takes place.  The Philadelphia Mummers still continue today with a New Year's Day parade but without the "Chant" or musket blasts.
The tradition centers around the "Chant". The origin of the "Chant" is unknown but part of the current version can be found in a circa 1777 hymn-prayer by British writer John Newton called "Time by moments steals away".  The version that is cried today is of older English style grammar. Hearing the mysterious "Chant" is a must to get the full intent of its sayings. It is part sermon, song, poem, and speech with religious and spiritual under tones in its three-minute version. A lady's version is also available but is rarely cried.
Today the Cherryville New Years Shooters group consists of 450 members and travels to approximately 50 locations in the Cherryville area. The group starts at Midnight on January 1st of each year and shoots for 18 straight hours ending at the Rudisill Football Stadium in Cherryville. Some of the families and homes are the same ancestors of 250 years ago. Shooting still takes place along the Indian Creek, Howard's Creek and Bethpage area as it did some 250 years ago. Many of today's shooters are of the same bloodline as the early pioneer shooters. With these people involved, the tradition is in great hands and will continue for many, many more years.


Good morning* to you, sir**. We wish you a happy New Year,
Great health, long life, which God may bestow
So long as you stay here below. May he bestow the house you're in,
Where you go out and you go in. Time by moments steals away,
First the hour and then the day. Small the lost days may appear,
But they soon mount up to a year. Thus another year is gone,
And now it is no more of our own, but if it brings our promises good
As the year before the flood, but let none of us forget
It has left us much in debt, a favor from the Lord received
Since which our spirits hath been grieved. Marked by the unerring hand,
Thus in His book our record stands. Who can tell the vast amounts
Placed to each our accounts? But while you owe the debt is large,
You may plead a full discharge. But poor and selfish sinners say,
What can you to justice pay? Trembling last for life is past
And into prison you may be cast. Happy is the believing soul,
Christ for you has paid the whole. We have this New Year's morning*
Called you by your name, and disturbed you from your rest,
But we hope no harm by the same. As we ask, come tell us your desire,
And if it be your desire, our guns and pistols they shall fire.
Since we hear of no defiance, you shall hear the art of science.
When we pull trigger and powder burns, you shall hear the roaring of our guns;
Oh, daughters of righteousness, we will rise and warm our eyes
And bless our hearts, for the old year's gone and the New Year's come
And for good luck, we'll fire our guns!